In a twist worthy of magical realism (the literary genre that’s enchanted travellers to South America), Cabo Blanco is a kind of sketch of Hemingway’s famed book about the bucolic little spot on the Pacific of Peru.

There is a quaint town in northern Peru that goes by the name “Cabo Blanco,” one that embraces its world-record holding status, one that attracted stars such as Marilyn Monroe and Joe Dimaggio, that erected a bust of the American writer Ernest Hemingway, and is now a one-street wonder that holds on to the magic of Peru.

The best way to get there—although not by any means the easiest—is walking along the beach from the all too popular Máncora, a prime destination for anyone eager to walk along the traditional tourist circuit in Peru. I only discovered this town through Jorge, the only bookseller in Máncora, who has pitched his tent on the sidewalk—alongside the fruit vendors and travelling hippies selling jewellery—searching and selling books for 20 years.

“What type of book are you looking for,” he said, after I asked for a recommendation. 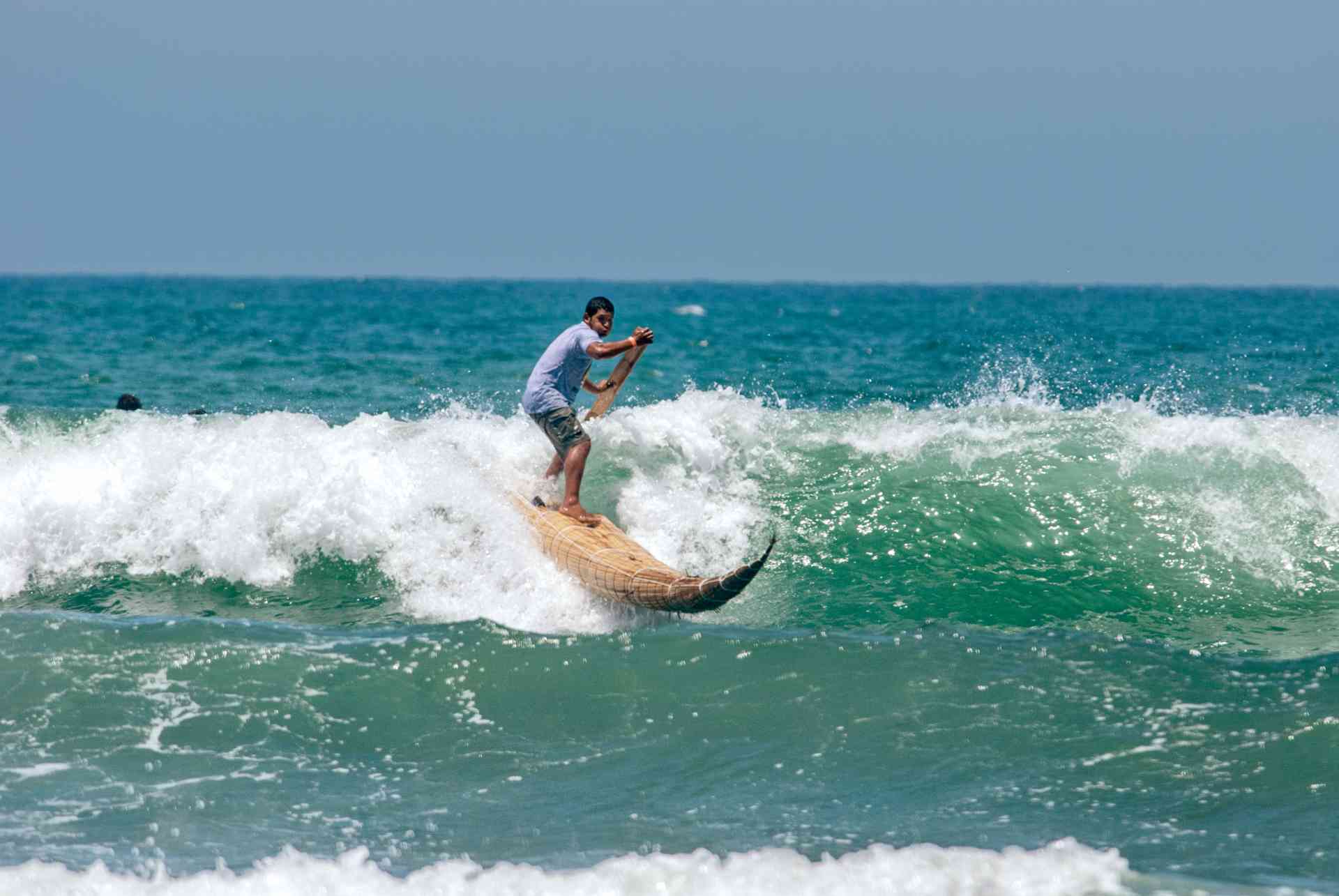 Máncora is a popular resort, beach and surfing spot in northern Peru, not far from Cabo Blanco. (José Barragán/PromPeru)

“Something from Peru, something that will show me the real Peru,” I said, and I traded a tale of Henry James and 15 soles for The City and the Dogs, by Mario Vargas Llosa, the only Peruvian to have won the Nobel Prize in Literature, in 2010. When he received the award he kissed his fingers, crossing himself, and pointed towards the sky. The bookseller told me about a fabled beach that had enchanted Ernest Hemingway, a place worth the time for anyone looking to see a unique slice of the country. 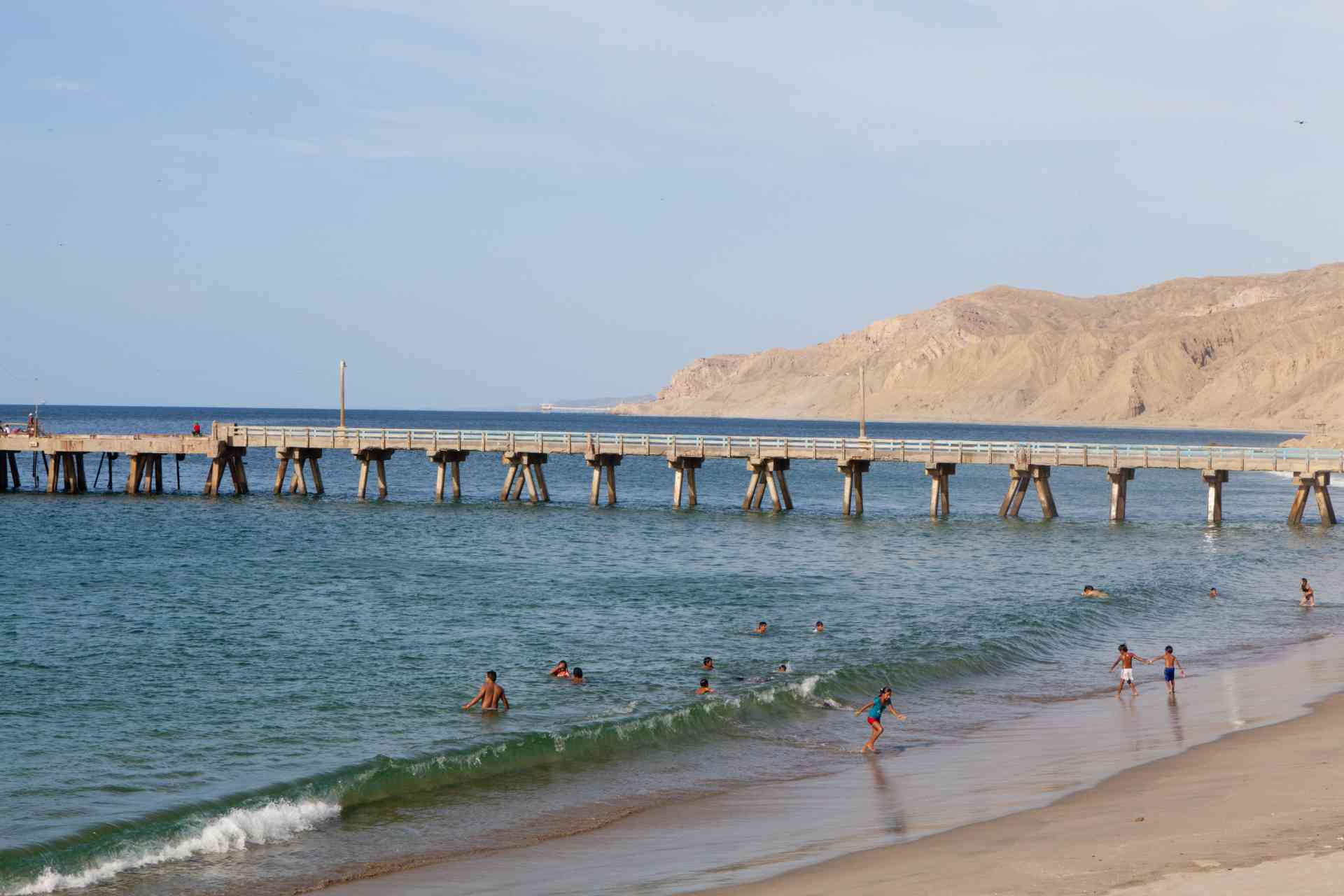 Cabo Blanco is all about beach life and becoming known for its surfing. (Gilan Tubbeh/PromPeru)

“Walk through the beach? How long will it take to get there?” I said.

He looked up, glanced at the noon sun, and said: “If you leave now, you might get there before it gets dark.”

So I wasted no time, and after a six-hour walk through the hillside of northern Peru, through towns where the economy revolves around tourists swimming with turtles, through abandoned industrial sites, miles and miles of solitude, of empty sand and the sound of the sea, of a kite surfer or two, of beach-houses that grant travellers a glass of water, Cabo Blanco awaits at the foot of a hill, the dead-end where the water consumes the path. (Cabo Blanco is about 31 kilometers from Máncora.)

It was once a fisherman’s heaven, home of the world record for a 1,560-pound black marlin catch (by American Alfred Glassell Jr.)—imagine, one heavier than a polar bear, one ten times heavier than a beer keg.

“During the spot’s heyday, A-listers like Marilyn Monroe, John Wayne, Humphrey Bogart, Joe DiMaggio and Ernest Hemingway flocked to Cabo Blanco in the hopes of landing the big one,” writes Nick Dall in “The Rise and Fall of the World’s Most Famous Fishing Sport,” published by OZY media. Hemingway was actually in Cabo Blanco for more than a month, fishing and filming for The Old Man and the Sea (the famous movie based on his famous novel), some of which was filmed there, mostly related to that giant marlin. 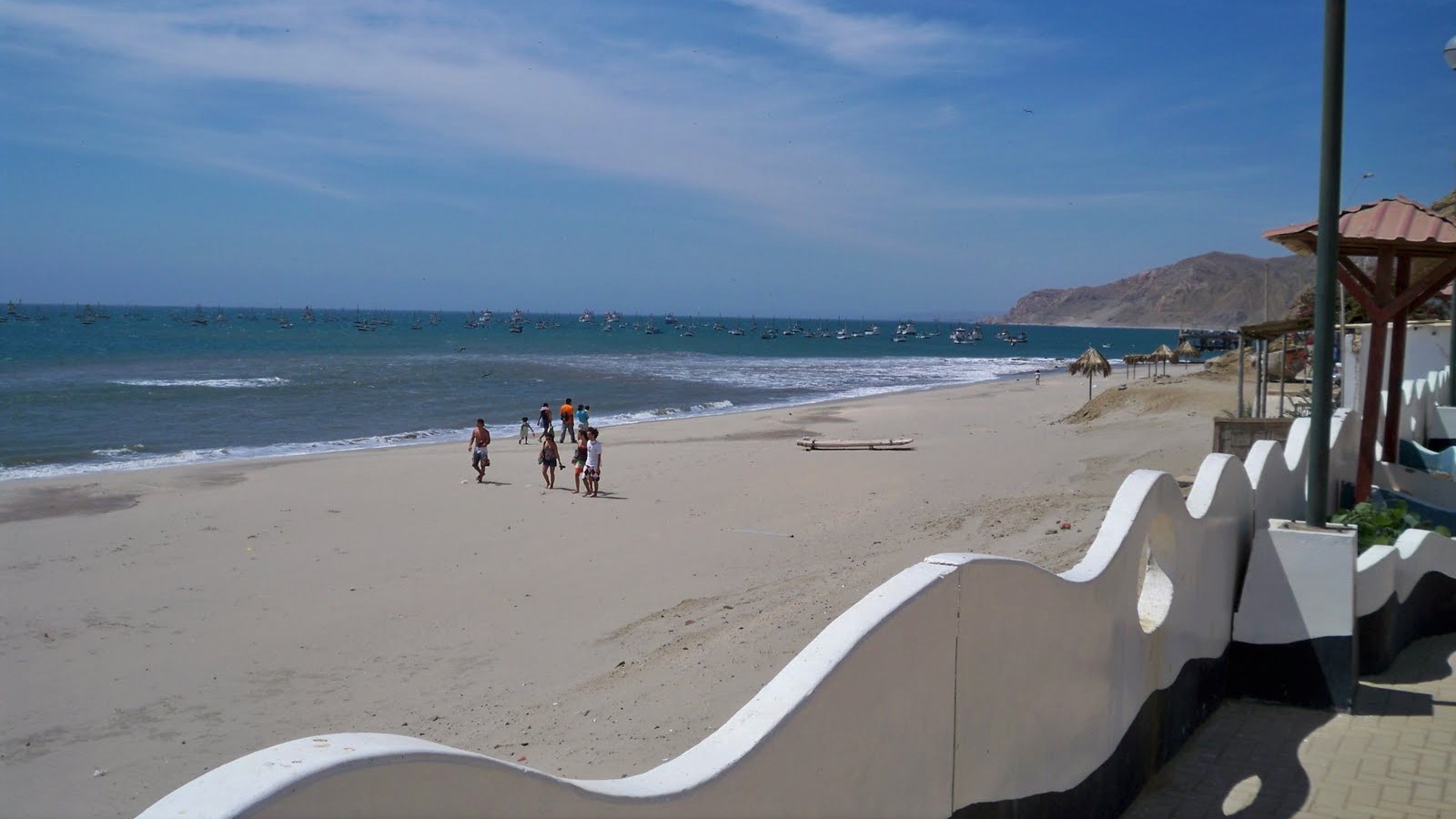 In a twist worthy of magical realism (the literary genre that has enchanted travellers to Peru and the rest of South America), Cabo Blanco has become a sketch of the town described in Hemingway’s famed book, and itself a town of homage to Hemingway. Although the novella takes place in Cuba, this Peruvian town feels directly out of the book. In Cabo Blanco, the only hotel is named “The Marlin,” the only restaurant is named “The Marlin,” a marlin is painted at the entrance of the town, another is painted on the boulevard named “Ernest Hemingway Boulevard,” where a bust of the writer still stands.

I walked around the town—talking to fishermen who remembered their fathers’ stories of past glory, to the bar where pictures of Hemingway and the world-record marlin still hang—before finishing the day with a traditional Peruvian dish: fried chicken and french fries cooked on a stove on the street.

Then, walking at night, into my lodging, a little girl surprised me with a question.

“Hey… can you give me your shoes?”

Although only a child, one that could not have been older than seven, she was already part of the workforce, the sentry at the public bathroom, charging 25 cents for the entry. Alone, under the night, again she insisted:

It is not rare to see children working in jobs as these in Peru. Although it is much more common to see them accompanied by their parents, this time she was alone.

“You can just buy another ones… I cannot,” she said, when I pleaded they were the only shoes I owned, the ones I wore everyday for four months.

The small towns of Peru either receive abundant wealth through a massive influx of tourism, like Aguas Calientes (the town closest to the ruins of Machu-Picchu), or Paracas (another beach town, famous for tours into Inca ruins). 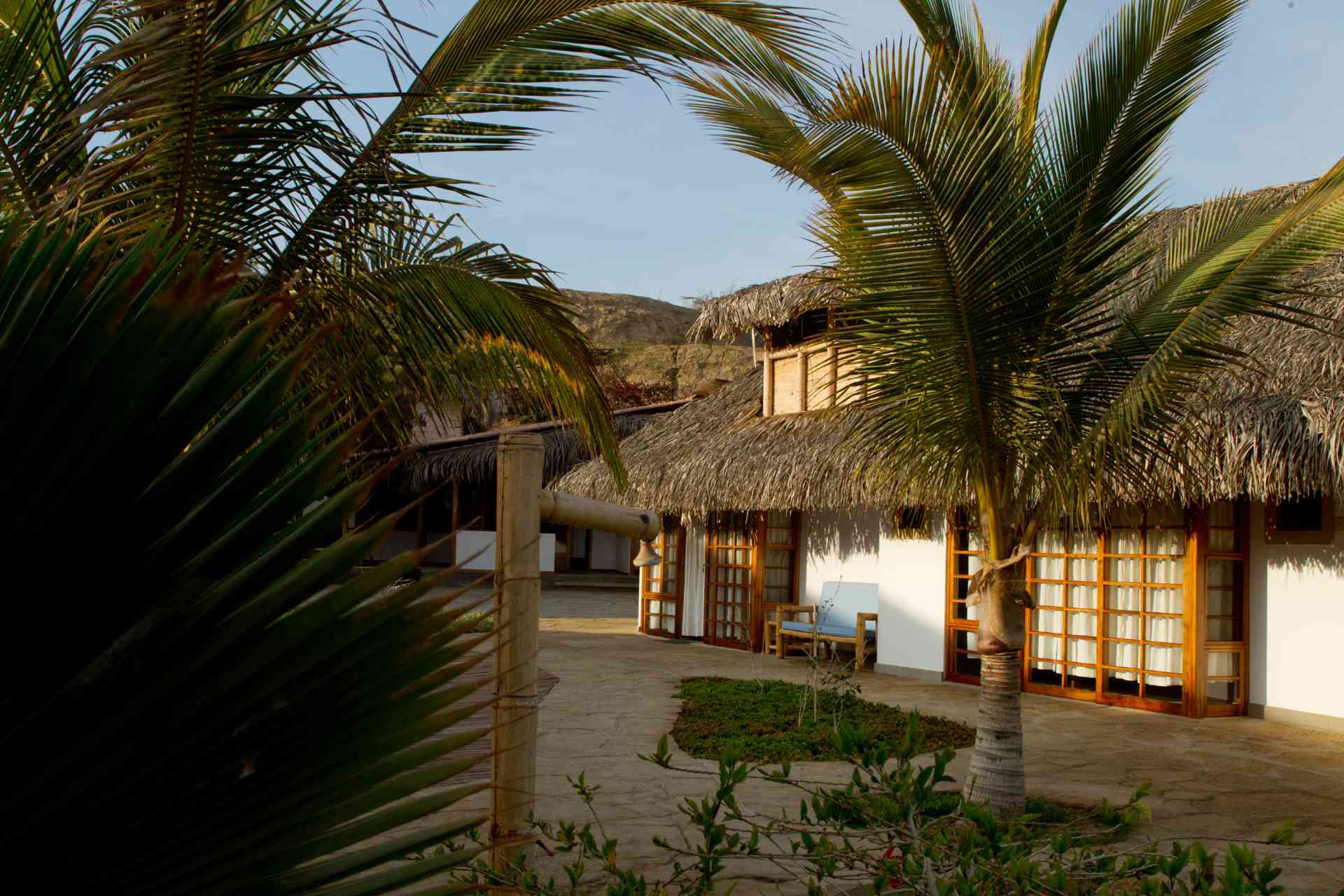 Mancora is known for its villas and resort options. (Pilar Olivares/PromPeru)

Cabo Blanco, like most, survives on local industry, the depleting fishing, and the commuters who must leave the town to work mostly jobs of physical labour. It was precisely the latter that served as both my companions and entertainment on the only way out-of-town, a combi or minivan, the most popular public transportation in Peru.

The entire ride seemed more like a fare or a party, rather than the quiet, ordinary bus rides one gets used to. At the sight of a foreigner, they asked of my nationality, a bit of my travels, striking jokes mostly at my expense. I felt as if in a crowded clown car, one so delightful and full of the South American jest that I love.

When we were out-of-town, up in the strip of El Alto, the driver spoke up:

“Traveller, where are you going off to?”

“Piura. Where should I get off?”

“Piura? I’m afraid this is as far as I can take you,” said the bus driver, but as I was getting ready to get off, the entire bus full of dusty workers roaring in outroar and guffaw, demanded the driver to drive me to the stop.

“Does anyone care if we are a minute late?” said one.

And so the driver, laughing, renounced the bus route and drove what would have been an hour walk on the highway, while the bus cheered and whistled to their success, laughing and screaming as if in a genuine Peruvian party. At my departure, they wished me the best and gave me a bag of bread; I felt as though I was leaving behind old friends. 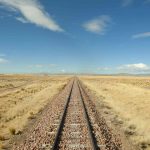