That Ayni Thing: Where Reciprocity is Just a Way of Life

There are some words and concepts that for many reasons should be shelved and put away to be forgotten. They work within a time and place, but beyond that, they simply fall flat. Then there are some concepts that might just be of eternal value and deserve to rest in a kind of immortal docking zone for all time. They should be kept, taught and practised—at least, in my own frame of reference.

While reading up on Peru and the Andean world, I remember my first view of the Quechua word “ayni.” Sitting in Hawaii during a driving rainstorm, I kept rereading the word and its description, which roughly explained, translates to a kind of “reciprocity among communities and peoples of the mountains.”

Rain pounded around me while I thought about what a simple concept it was, and how perfectly it summed up so much of the Himalayan world, where I had lived for a decade. It was familiar, and somehow just right. Here in the Andean world is a concept that has long been a kind of guiding principle. A philosophy, rather than any law, it is part of a social responsibility to your community and to those you share space with. It binds one to one another and to nature, encouraging the notion that everything is connected. It seemed to link perfectly to the Himalayan mantra “Cooperate or Perish” that I’d long loved.

It had also brought back into sharp focus my Hungarian grandmother’s tales of her crew of feisty Magyars getting together on weekends to make wine (and drink plenty of it), ferment root vegetables, and prepare meals that would be partitioned and split into households. Each contributed, and each received, without any discussion or question. In Western terms, it might be described more clinically as the notion of social capital—but the anyi concept seems to reach far beyond that.

Within a day of arriving in Peru, I am hearing about ayni once again. It wasn’t simply a term from long ago. It lived in deed, and in spirit!

The short, powerfully built figure of scholar and Inca Empire historian Donato Amado Gonzalez stands in front of a portion of the immaculate and utterly dominant stonework of the brilliance that is Sacsayhuaman, a vast Inca archaeological site that sits on the fringes of Cusco. Blocks of stone eased into place, weighing tonnes, sit in ruggedly beautiful lines. Donato purses his lips when asked how it was built, showing a slight hint of displeasure there could be any doubt or wonder.

He responds that the concepts of ayni and responsibility were part of it, and adds there was long-term thinking and an absolute commitment to the notion of working together—although he does concede the Incas used what one could define as slave or forced labour to a degree (with reciprocity as the driving moral force behind it) to build their structures. (A question arises in my mind about the contradictions of “slave labour vs ayni,” but I let it rest for the time being.)

“But does ayni live still,” I wondered? Or is it another of the glorious but out-of-date ideals from another time? 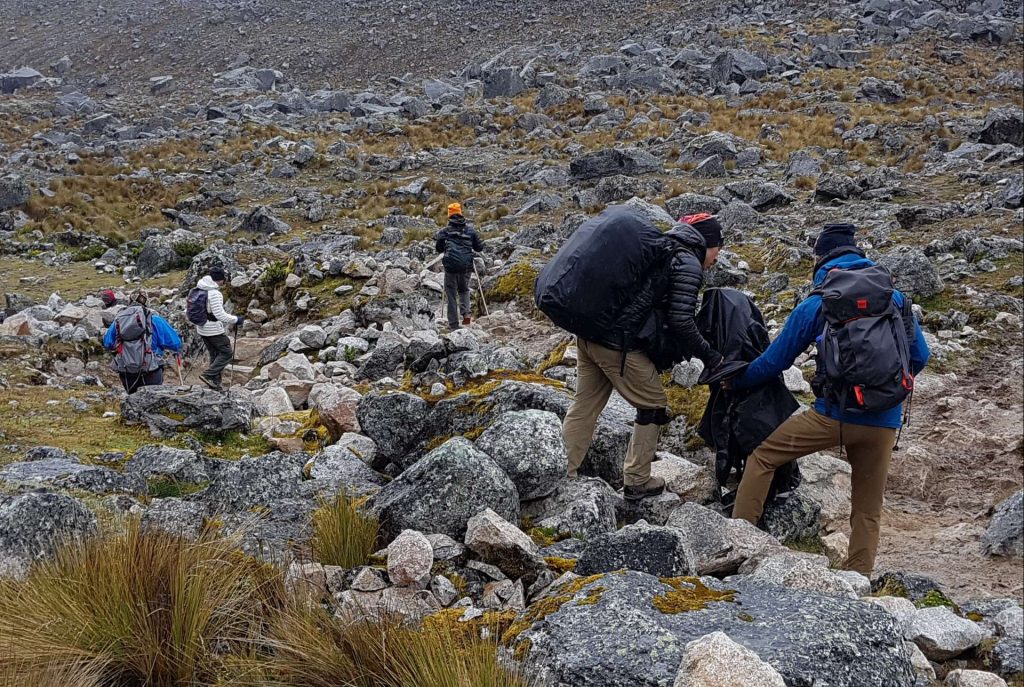 Jeff helping our videographer in the rugged Andean valley, where he says, it’s “cooperate or perish.”

Weeks later, after having the concept wordlessly emerge again and again during my time in Peru, I come to this idea of ayni being very much alive in present-day Andean culture. In restaurants, family homes, villages—everywhere. A gathering of people to cook meat on a hillside just outside of Cusco that I witness demonstrates a habitual kind of calm integration, with men and women working in partnership, bent in preparing the fire. There is no split between young and old, no discernible distinction. No one sits relaxing—that will come later, together.

Ayni seems too, to come alive every time coca leaves are offered—and this happens a half-dozen times daily. One offers to others, before taking any of the leaves oneself. Wordlessly, men and women alike, accept the offerings. When friends come together to assist each other ayni may not be mentioned, but the theme is repeated in deed, and the idea that people gather for a benefit of something grander than the self is absolutely alive.

Nowhere is ayni more vibrant and tangible than in the world of the Chawaytiri, sitting in the high mountain heat of community elder/headman Luciano’s front lawn. The ever-present coca sits in a bag nearby and in our masticating mouths, having been relentlessly passed around. 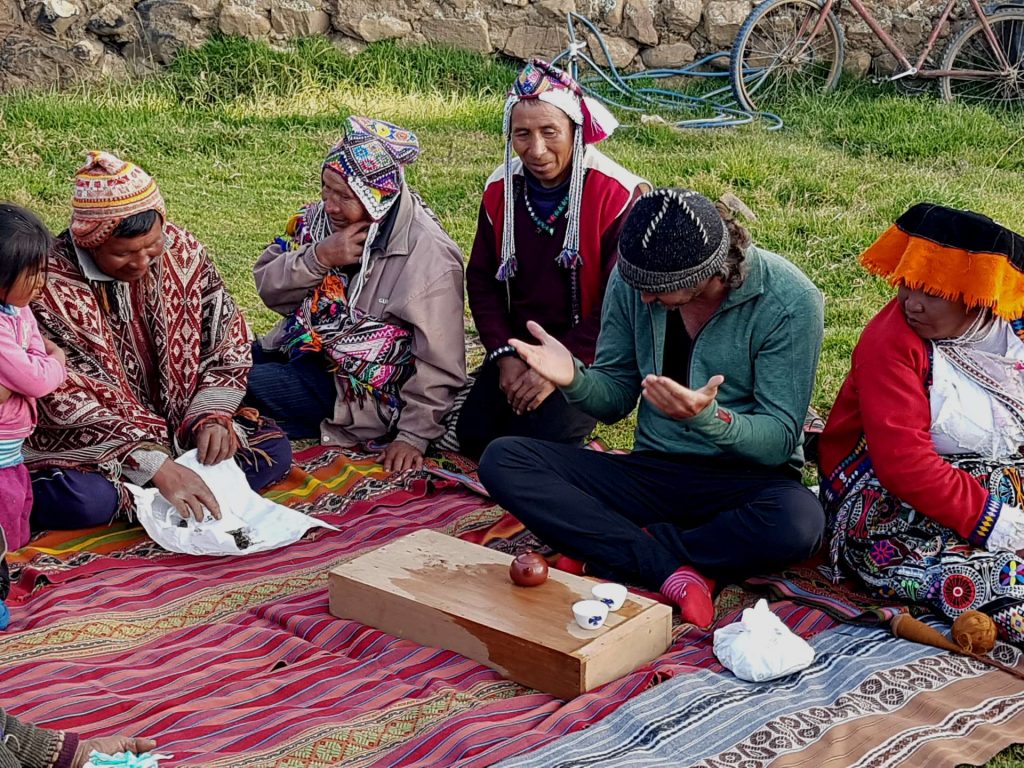 Jeff offering his precious Puerh tea, which he brought to share with the Chawayatiri community. Luciano, village elder, divides it among members: “If a cup of tea is offered,” says Jeff, “a friendship is offered.”

Luciano speaks of the cities, and of its plastic, with a careful disdain. He speaks too, of how “easy it is to forget what is important” in the urban spaces. He is casually eloquent, content in the knowledge that he sees the world quite clearly. Sitting around us are cousins, neighbours, friends and his immediate family. All in this community is done together. All is shared, divided, and all is complicit in design. When I ask him what responsibilities he has as leader he replies simply: “I guide things. I do not decide things.

But, as I’m to discover, he does far more than that. Later in the day, as a kind of tribute to Luciano and the community, I serve tea. It is immediately understood as the tribute it is meant to be, despite the leaves being tea and not coca, and despite the servings of tea coming from walnut-sized cups and a tiny red clay pot! At the end of serving, I present a full cake of Puerh tea (a specialty tea, grown in Yunnan province, China, where I lived for many years) to Luciano on behalf of the community. It is something beyond payment, and he knows it immediately. 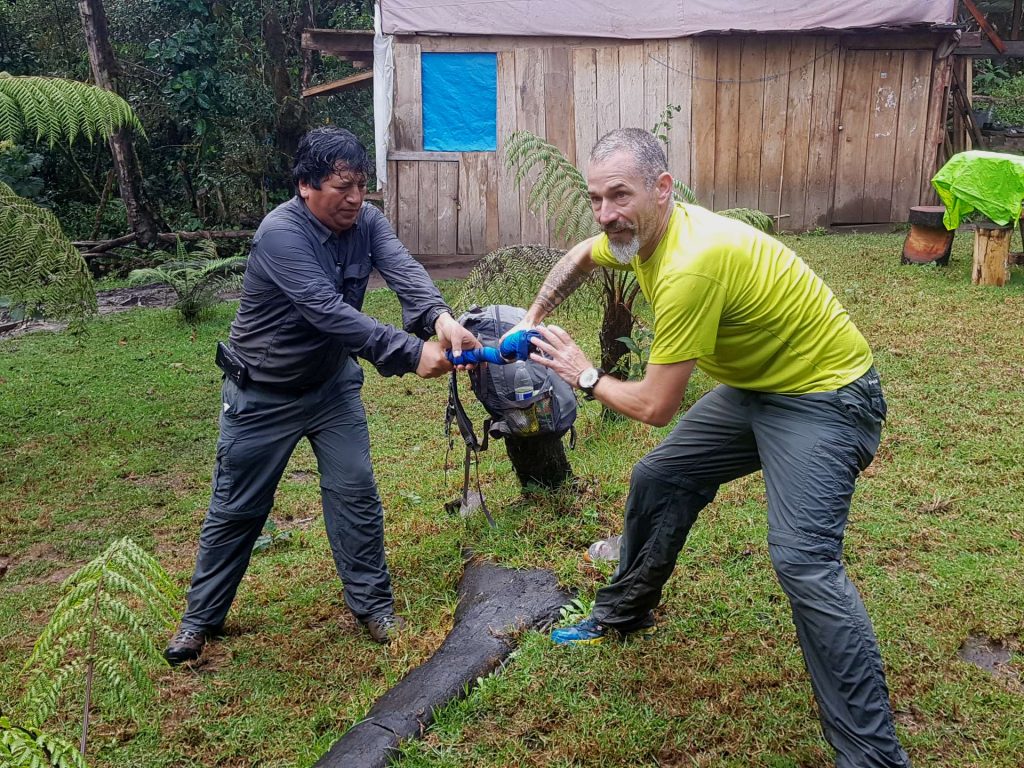 After a demure nod, he promptly starts to divide the cake into portions for each family right there on the grass, arranging pieces of paper as gift wrappers for each hunk. There is no hesitation, no pomp, and nothing takes away from the forthrightness of the act. Each family represented gets an equal share of the dried green fuel which I’ve brought from another world, and each nods as its accepted. It is done.

Anyi is here—I see the manifestation of a concept I’ve been pondering since arrival in Peru—and in many other little moments, and though the word itself feels unnecessary, the concept is very much alive, and for now at least, entirely vital.

Jeff Fuchs led the In From the Outpost team in Peru. In the featured photo (top) he’s stopping to chat, get advice and share his bag of coca with a man living in the forest along the Salkantay Trek. It was, said Jeff, a perfect moment of ayni. 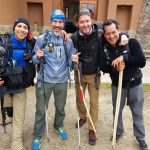 From Mountains to Valleys to Forest to Coast, Peru is a Trekking Lover’s ParadiseSTORIES 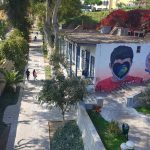